Posted on September 29, 2013 by Christine Hartweg

On 22 September 1560 Lady Amy Dudley was laid to rest at St. Mary’s Church, Oxford. After her sudden death on 8 September the court had gone into mourning for the wife of the queen’s favourite, Hampton Court being “stuffed with mourners”.1 At Oxford, the deceased had lain in state for a couple of days at Gloucester College, her body “safely cered”, embalmed. Inside St. Mary’s an elaborately carved hearse, 7 ½ feet wide and 14 feet high, had been constructed to receive her coffin for the funeral. The church was hung in black.

The chief mourner was Lady Margery Norris, the queen’s good friend, and the ladies of Cumnor, Lady Amy’s neighbours, featured prominently at the ceremony. So did her half-brother, Sir John Appleyard, who walked in front of the coffin, in a “long gown, his hood on his head”.2 – The whole proceedings had cost her widower, who remained absent as was the custom, some £2,000. The London undertaker, Henry Machyn, was pleased to note:

The [blank] day of August [sic] was bered my lade Dudley the wyff of my lord Robart Dudley the master of the quen[‘s] horse, with a grett baner of armes and a vj baners-rolles of armes, and a viij dosen penselles and viij dosen skochyons, and iiij grett skochyons of armes, and iiij haroldes, master Garter, master Clarenshux, master Lanckostur, and [blank].3

Almost to the day 28 years later and only a few miles away, Robert Dudley stopped at Cornbury Park, a hunting lodge he had use of in connection with one of his offices. England was now at war with Spain – having just prevailed over an Armada – and the last Spanish ambassador had left in 1584. So, King Philip had to rely on spies, and one of them, the Genoese merchant Marco Antonio Messia, reported:

On the 27th [of August 1588] the earl of Leicester started for the baths of Buxton, but on the way, in the house of a gentleman near Oxford, it is said he supped heavily, and being troubled with distress in the stomach during the night he forced himself to vomit. This brought on a tertian fever, which increased to such an extent on the third day that on Wednesday, 4th [September], at ten o’clock in the morning, he expired. The last time I saw him was at the earl of Essex’s review, at the window with the Queen. On the previous week I had seen him go all through the city, accompanied by as many gentlemen as if he were a king, and followed by his household and a troop of light horse. He was going from a country house of his to St. James’s, and was quite alone in his coach. He had gone through a few days before on horseback, even more splendidly accompanied, and showed every appearance of perfect health, as if he would have lived for years. For the last few months he has usually dined with the Queen, a thing, they say, such as has never been seen in this country before. He was a man of great authority and following, and his death will be much felt; but, on the other hand, the general opinion is that the conclusion of peace will be much easier than before, as he was usually in favour of war. God decree all for His greater glory!4

Leicester died almost suddenly on his way to the house … in which he had caused his wife to be killed, the master of it having invited him to dinner. The Queen is sorry for his death, but no other person in the country. She was so grieved that for some days she shut herself in her chamber alone, and refused to speak to anyone until the Treasurer and other Councillors had the doors broken open and entered to see her. The Lord Chancellor [Sir Christopher Hatton], now that Leicester is dead, has much more power than before, and is helped by Secretary Walsingham, with whom he is very friendly.5

That Leicester was mourned by no-one except Elizabeth is a common cliché; however, he seems to have died peacefully, attended by his family. He certainly had the company of his second wife, Lettice, as well as of his brother Ambrose and his sister-in-law. With all three he had always been very close. Of Ambrose’s wife, Anne, he wrote that he “did both honor & esteme hir asmoch as any brother did his syster”.6 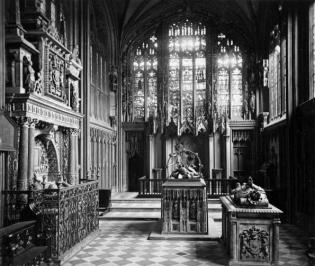 Beauchamp Chapel of St. Mary’s Church, Warwick. Robert Dudley’s grave is on the left, his brother Ambrose’s in the foreground on the right.

The earl also had the spiritual comfort of his chaplain, something he would have appreciated. Leicester was also the great patron of Puritan preachers, and it is interesting in this context that, other than with some other prominent Protestants, no dying speech of his was recorded. Perhaps he died more silently; his death was useless for propaganda, unlike that of Katherine Grey (Lady Jane’s sister), the 1st Earl of Essex (Lettice’s first husband), or Sir Philip Sidney (Leicester’s nephew).

Studying at Oxford University was Leicester’s illegitimate son, also Robert Dudley, who had just turned 14 and had been with his father at Camp Tilbury in August. Many years later, Robert junior claimed in his memoirs that he had been made a colonel by his father. What is more likely is that he was called to Leicester’s death bed, being his only son and clearly his favourite. The distance between Oxford and Cornbury House would hardly have constituted a problem once it was clear that the earl was dying. Robert Dudley junior would have had little cause to mention any such visit in his writings, unless Leicester had disclosed some spectacular secret to him, such as that he had indeed married Robert’s mother, Lady Douglas Sheffield. This being not the case, Robert junior, who was fighting to be acknowledged Leicester’s legitimate heir, had no cause to write about it – even if he saw the earl during his last days.

Queen Elizabeth received a letter of condolences from Leicester’s friends, the Earls of Derby and Shrewsbury, but in her response she made clear that she did not wish to be reminded of his death:

We desire rather to forbear the remembrance thereof as a thing whereof we can admit no comfort, otherwise by submitting our will to God’s inevitable appointment. Who notwithstanding his goodness by the former prosperous news [of victory] hath nevertheless been pleased to keep us in exercise by the loss of a personage so dear unto us.7

Sweet Robin lived on in her heart and never died. – There was no mourning at court, and while Leicester’s funeral was stately, it was no state funeral. On 10 October 1588, it took place at the Beauchamp Chapel in St. Mary’s Church, Warwick. It was Robert Dudley’s wish to be buried “where sundry of my ancestors do lie”.8 His legitimate son, Robert, Lord Denbigh, who had died in infancy, was already there. The event cost about £3,000, and the widowed Countess of Leicester was present.

As chief mourners acted Robert Devereux, Earl of Essex, Leicester’s stepson, and his nephew, Sir Robert Sidney. The deceased earl’s brother-in-law, the Earl of Huntingdon, also took part, along with other relations like Lord Dudley (of Dudley Castle), Lord Rich (the husband of Leicester’s stepdaughter Penelope), Sir William and Sir Francis Knollys (two more brothers-in-law), and several cousins of the Blount and Jobson families. The Bishop of Salisbury preached the sermon and the earl’s chaplains, Dr. Holland and Mr. Cartwright, attended; so did his faithful private secretary, Arthur Atye.9 Though at first two had planned to go, none of the senior privy councillors seem to have been at the funeral; no Hatton, no Walsingham, no Cecil. Where they so glad to be rid of their powerful colleague they felt not like putting in an appearance? Or was it politic to stay away from the widowed countess, a persona non grata?

Contrary to his plans, the Earl of Warwick, Leicester’s brother, could not make it to Warwick; his health was failing him. Sir Henry Killigrew, on the other hand, asked the privy council for permission to leave his post in the Netherlands, ‟that I may yield him the last service and testimony of my devotion at his funerals.“10 – Killigrew had served Leicester’s father before he became a diplomat and servant of the queen, but the closeness to his old patrons always remained. His request was rejected.

Amy Dudley’s other half-brother, Arthur Robsart, her father’s illegitimate son, in 1560 had attended her funeral at Robert Dudley’s invitation. There was no-one to invite him to the latter’s funeral, but he remembered his brother-in-law as “my cheife frend gone, the yerle of Lesseter”.11