The Earl of Leicester’s Social Conscience

Posted on November 1, 2013 by Christine Hartweg

According to Leicester’s Commonwealth, the Catholic libel of 1584, the Earl of Leicester was a rapacious upstart, persecuting the old and decent gentry families up and down the country. Local historians of the 17th century were much influenced by the satire, some, like the famous William Dugdale of Warwickshire, referring directly to it.1 Hardly any of these stories, often recounted as fact in popular narratives, stand up to scrutiny; for example, Leicester’s alleged feud with Sir Richard Bulkeley of Anglesey, an attempt to drown Sir Richard on the London Thames included, is no more than a myth.2 Also, 19th and 20th century authors critical of Leicester have regularly failed to grasp that the supposed “victims” in those tales are not “the poor” but wealthy gentry who had very little regard for the poorer sections of society themselves.

A case in point is the assessment of Leicester’s legacy in North Wales. In 1563, when he entered his Welsh possessions granted by the queen, there had existed a virtual tenurial chaos for more than half a century. Some leading local families benefited from this situation, to the detriment of the crown’s revenue. In order to amend the problem, Dudley, after conducting a thorough survey, effected compositions with the tenants. Through these they could better themselves socially by becoming freeholders instead of copyholders. In exchange Leicester’s agents agreed new rents with the tenants. The increase in revenue the earl achieved for himself mirrored the inflation of the preceding decades, but was everything else than “rack-renting”.3 Also, all tenant’s rights of common were guaranteed against enclosure as were the boundaries of the commons; serfdom was finally abolished, having survived in a few instances. – Leicester’s tenurial reform in his lordships of Denbigh and Chirk “was an ambitious resolution of a long-standing problem, … without parallel in Elizabeth’s reign”; it was still cited as exemplary in the times of Oliver Cromwell. It was not an example of aristocratic rapaciousness.4 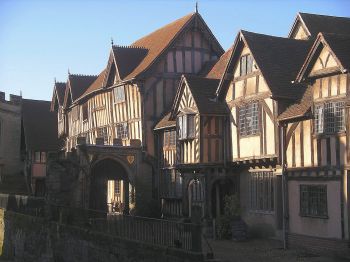 However, Robert Dudley only once visited Wales in person (in 1584); this was quite different in the region he claimed as his home turf, the West Midlands, and especially Warwickshire. Here he displayed an “almost emotional”5 interest. When Mr. John Fisher of the town council of Warwick visited London in November 1571 he sought to speak with the Earl of Leicester. The queen being absent on a hunting trip near Greenwich,

the said earl among other lords attending her highness the said Fisher had good opportunity and took such time as the said earl heard him at length … and asked what good trade there was in the said town and how the poor were relieved. To which the said Fisher answered that the number of the poor was great … ‘I marvel [said the earl] you do not devise some ways among you to have some special trade to keep your poor on work … which methinketh should not be only very profitable but also a means to keep your poor from idleness, or the making of cloth or capping or some such like. But I do perceive that every man is only careful with himself …

I could wish there were some special trade devised wherewith having a good stock both reasonable profit might arise and your poor set on work. Whereunto I would be glad to help, and in mine opinion nothing would be more necessary than clothing or capping to both which occupations is required many workmen and women and such may be employed as in no faculty else, for though they be lame they may pick and free wool and do such things as shall keep them from idleness and whereof some commodity may grow. And therefore many such poor as I perceive you have, I would to God you would some ways devise that they might in sort be relieved and your commonwealth profited. And because I am of that country and mind to plant myself there I would be glad to further any good device with all my heart.’

The workhouse later acquired a very bad reputation, but to the Puritan mind in the 1570s the employment of the poor in some industry seemed both natural and good. However, Leicester in 1571 also founded a hospital in Warwick, “for sustentation and relief of needy, poor and impotent people”. This exercise was as medieval as its 14th century lodgings, with its 12 “brethren” and their master, a clergyman, attending daily services and praying for their patron. Leicester later changed the statutes for the facility – his Maison Dieu as he called it – to care for 12 soldiers or sailors “wounded, maimed or hurt in the wars”, and their wives, and allotted £200 a year for their upkeep in his will.

Yet Robert Dudley was not naive and seriously thought about the social issues of his time, as is shown by a letter he wrote to William Cecil in 1566: “And whether it be cause or no I know not but I never saw in so rich a soil so many miserable and poor people. It shows few have all and great numbers nothing”.6

Nor was he a heartless man. Among Leicester’s many offices was the chancellorship of the County Palatine of Chester, and on 28 June 1578 he wrote to the Mayor and Justices of the town, having heard some disturbing news about inmates dying in the county prison:

So have I thought good to move you to assemble yourselves together and take some good order that the same prisoners may be relieved at the least wise as far forth as by the laws you are bounden to relieve them. It is very pitiful to hear of, that prisoners are dead by famine since the last assizes, and those that be living are very many very feeble in like peril of death; which I pray you to have in good consideration.7

It was certainly unusual for a man in Leicester’s position to express such feelings. When in 1586 a number of judges succumbed to jail fever, the Principal Secretary Francis Walsingham was shocked at their plight (as he wrote to Leicester); he spared no thought for the prisoners. By then the earl was in the Netherlands, Elizabeth delaying to send much needed money for the English army. Leicester was desperate: “They cannot get a penny; their credit is spent; they perish for want of victuals and clothing in great numbers.” – “There was no soldier yet able to buy himself pair of hose, and it is too too great shame to see how they go, and it kills their hearts to show themselves among men”. – “I assure you it will fret me to death ere long to see my soldiers in this case and cannot help them.” Months later, in the face of mass desertions and corrupt officers, his very honest conclusion was: “I do but wonder to see they do not rather kill us all than run away, God help us!”8

Of course, a great nobleman like Leicester was expected to give to the poor and he did so on a daily basis. In his lifetime he even had a reputation for generosity and accessibility.9 Leicester’s account books indicate what kind of persons could expect to benefit from the earl’s kindness. Between countless mentions of the generic “poor woman”, there are also several instances of poor Irishmen (who always seem to have appeared in groups) – a result of failed English policy on the neighbouring island.

As in England, Leicester’s habit to give to poor or otherwise deserving people continued during his stay in the Netherlands. On his arrival the Dutch trumpeters and a blind Dutch harper were the lucky ones. A few days later it was “a blind man that played upon the organs”. A little girl who presented the earl with strawberries and cream received 5s., while the “perfumed gloves” of another visitor were worth 9s. A poor Englishman “with a great cold” received 2s.10

Sources
Correspondence of Robert Dudley, Earl of Leycester, during his Government of the Low Countries, in the Years 1585 and 1586. (ed. John Bruce, 1844). Camden Society.

Hi, I'm the author of "Amy Robsart: A Life and Its End" and "John Dudley: The Life of Lady Jane Grey's Father-in-Law". I blog at www.allthingsrobertdudley.wordpress.com
View all posts by Christine Hartweg →
This entry was posted in errors & myths, letters, Netherlands, religion, Robert Dudley, sources & historians and tagged Denbigh, Warwick. Bookmark the permalink.

1 Response to The Earl of Leicester’s Social Conscience