The Art of Diplomacy: Elisabeth de Valois and Edward VI

Posted on October 14, 2014 by Christine Hartweg

In July 1551 the French Maréchal St. André visited the English court, ostensibly to bestow the prestigious Order of St. Michael on Edward VI, but also for negotiations about a marriage between the young English king and the even younger French princess Elisabeth de Valois. Amid the specially erected ‟banqueting houses“ and pavilions in Hyde Park Edward had lots of fun playing host, making notes in his journal:

After, they dined with me, and talked after dinner, and saw some pastime, and so went home again. … The same night mons. le marechal St. Andrew supped with me; after supper saw a dozen courses [jousting] … The next morning he came to see mine arraying, and saw my bedchamber, and went a hunting with hounds, and saw me shoot, and saw all my guard shoot together. He dined with me, heard me play on the lute, ride, came to me in my study, supped with me, and so departed to Richmond.

In the course of the festivities a marriage settlement was indeed agreed upon (after much haggling over the dowry). Early the next year Edward sent his six-year-old bride a “fair diamond”, from the late Catherine Parr’s collection of jewels.1 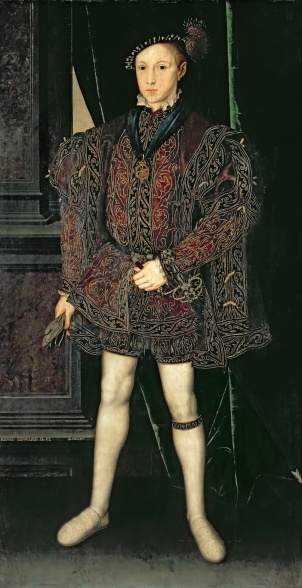 The portrait of Edward VI sent to Elisabeth de Valois, which she kept in her room

The talks which had ended so satisfactorily in the summer of 1551 had initially been conducted underhand by the Florentine Antonio Guidotti. In March 1550 a peace treaty between England and France had been concluded and six months later the Emperor Charles V’s ambassador in France, Simon Renard, updated his suspicious master about the art of diplomacy at the court of Henry II and his consort Catherine de Medici:

Guidotti presented to the Queen a portrait of the King of England, recently brought over by a courier. The Queen made a return for the gift by sending Mme. Péronne, governess of the princesses, to the said Guidotti, with a portrait of her eldest daughter, drawn to the life by a young lady named Elizabeth, who is in the Queen’s service. Following upon these overtures, the conditions of the marriage are being discussed, and also the means of joining France and England in close confederation.2

The next update came again six months later, in March 1551:

I can certify to your Majesty that the proposed marriage of the King of England with the Princess of France is being definitely discussed, and that the Constable has spoken of it and held communications upon it. It is also a fact that the Princess, who has had a portrait of the King placed in her chamber, often stands before it, and says to her mother the Queen: “I have wished good-day to the King of England, my lord.”3

What kind of portraits were these? Since it is clear that little Elisabeth stood before her betrothed’s image in her room it must have been a panel painting, probably of life size and in full length; after all, Edward was a king. According to Leon Battista Alberti, the great Renaissance theorist, such a portrait made “the absent present”.4 On the other hand, the picture sent by the French to England, and executed by a female artist named Elizabeth, was almost certainly a portrait miniature. Fortunately, both paintings seem to have survived to this day: Edward’s in the Louvre, Elisabeth’s in the Royal Collection.

On 25 July 1551, six days after the French-English marriage agreement had been signed, Edward VI’s chief minister, John Dudley, Earl of Warwick, wrote to Edward’s Lord Chamberlain, Lord Thomas Darcy, who was also one of his “special friends”5 in the king’s privy chamber. In his letter, Dudley told Darcy the story of the miniature of Elisabeth de Valois, no less, and how he had hit upon it in his desk the other day:

The miniature of Elisabeth de Valois, Edward’s bride, found by his minister John Dudley in a desk

Thes may be to signyfy unto your Lordship that aboute halffe yere or more paste at soche tyme as Guydot gave unto the Kinges Majestie a gylt cupp he also presented unto his highnes a pycteur of the lady Yzabell the Frenche Kynges doughter with whom now the contract between the Kinges highnes and his majestie ys begon to be made and for asmoche as yt might be that the sayde Guydot in that be halffe was but an instrument to others as peradventure to the Frenche quene her own silffe, who as I understand ys the most desyerus woman of the world that her doughter mought be bestowed here to our master, yt wold not do amys therfor in my opinion to shewe the sayde pyctour to the marshall afore the takinge of his leve of the Kinge.

Yt be nether herre nor ther for the matter yet perhapps yt wolde motche satisfy the saide quene whos practys I thinke veryly yt was to send it, that the same sholde apere to her not to be rejectyd, wherfor I have thought good to send the saide pycture to you yf the Kinges plesser be so to do that the same sholde be in a redynes; for the laste day lookinge in a deske of myne I founde yt there and marvelinge a while whose yt shold be, yt cam to my remembraunce that at soche tyme as Guydot made the present of yt to his majestie, his highnes deliverde it to me and comandyd me to kepe yt, thinkinge yt my dutye to send yt to his highnes with the consideration before rehersed referringe thexecuting therof to his majesties owne apetyt.