The Portraits of Robert Dudley (4)

Posted on October 19, 2019 by Christine Hartweg 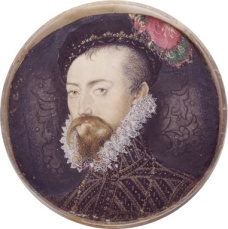 Nicholas Hilliard was a young goldsmith when in 1571 he produced a ‟booke of portraitures‟ for Robert Dudley, Earl of Leicester. 1571 was also the year of Hilliard’s first known work as a ‟limner“ or painter of portrait miniatures. Leicester was one of the earliest patrons of the young artist and may have introduced him to court.

Hilliard would paint Leicester many times, and the earliest surviving portrait miniature (now in the Victoria & Albert Museum) of the earl was painted sometime between 1571 and 1574, when Leicester would have been around 40. It seems likely that Leicester sent the picture as a gift to his sister, Mary, Lady Sidney.

Hi, I'm the author of "Amy Robsart: A Life and Its End" and "John Dudley: The Life of Lady Jane Grey's Father-in-Law". I blog at www.allthingsrobertdudley.wordpress.com
View all posts by Christine Hartweg →
This entry was posted in paintings, Robert Dudley and tagged Mary Dudley, Nicholas Hilliard. Bookmark the permalink.