Edward VI was a “cold-hearted prick” according to the eminent Tudor historian G. R. Elton, and often repeated proof of this fact is a story about the 13-year-old king told by Simon Renard, then the emperor’s ambassador in France. On 21 March 1551 Renard wrote to Charles V:

Incidentally I will add the account of an act which is said to have been committed by the King of England. He is said to have plucked a falcon, which he kept in his private chamber, and torn it into four pieces, saying as he did so to his governors that he likened himself to the falcon, whom every one plucked; but that he would pluck them too, thereafter, and tear them in four parts. I have heard the truth of the story certified by people whose testimony should place it beyond doubt; but nevertheless Ambassador Mason denies it, and accuses President Monluc of having excogitated it entirely himself.1

Stunningly, exactly the same story had been told by diplomats in 1514, 37 years earlier, with the young Archduke Charles, the later Emperor Charles V, as protagonist:

The 14-year-old Charles had been informed that his planned marriage to Henry VIII’s sister, Mary Tudor, was not going to happen, as Henry had just concluded a treaty with France to marry his sister to the French king, Louis XII. Charles replied (according to a Venetian report) “that his councillors had plucked him because he was young, ‘but bear in mind for the future I shall pluck you'”.2 Professor David Loades, in whose work on Mary Tudor I found this episode, adds: “This response was accompanied, apparently, by Charles plucking a young hawk alive, to the consternation of his councillors.” (Loades cites the 1970s work about Mary Tudor by W. C. Richardson).3 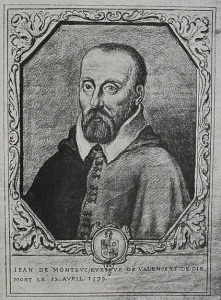 Jean de Monluc, who, according to the English ambassador, made up the story of the falcon

Although Renard himself mentions that the story was disputed it has been repeated by serious biographers, some writing as if Simon Renard was at that time the Imperial ambassador in England, which he became only in 1553. In March 1551 he stayed at Blois, with the French court. So any report of his about what was going on in the English court had to be second hand.

John Mason, in his turn, was at that time the English resident ambassador at the French court; President Monluc is probably Jean Monluc, younger brother of Blaise de Montesquiou-Lasseran-Massencôme, Seigneur de Monluc (Blaise was a writer on military matters and later also Marshal of France). Jean de Monluc became Bishop of Bordeaux in July 1551, but he had earlier served as a diplomat and homme politique. He travelled extensively in England and Scotland in his diplomatic capacity, and as recently as 1550 had he visited Scotland.

Interestingly, he had also been French ambassador in Venice from 1545, before his travels to other parts of Italy, Germany and the British Isles. So, in theory he might have picked up the story about Charles the future emperor in Venice. In other words, did this particular story circulate in the Republic?

The likelihood is that neither account is based on fact. It is – especially in the case of Edward VI – second hand diplomatic gossip. That this story occurs in relation to two different sovereigns who were at the time under tutelage because of their minority shows that a popular topos was at work here, rather than any report of fact. It might well rest on some mythological story Renaissance intellectuals loved to use for their narratives.

Hi, I'm the author of "Amy Robsart: A Life and Its End" and "John Dudley: The Life of Lady Jane Grey's Father-in-Law". I blog at www.allthingsrobertdudley.wordpress.com
View all posts by Christine Hartweg →
This entry was posted in Edward VI, errors & myths, Henry VIII, sources & historians, strange facts from popular books and tagged ambassadors, Charles V, France. Bookmark the permalink.

5 Responses to Did Edward VI Tear Apart His Falcon?