Posted on March 4, 2021 by Christine Hartweg

When Mary Queen of Scots was in English captivity she was allowed the lifestyle of a queen in exile, for example she kept a small household with servants and ladies-in-waiting and regularly took seat below a royal canopy. She also had herself painted by Nicholas Hilliard at least once, in 1578. There survive several versions of this portrait. Such pictures were acquired by noble and gentry households for portrait collections of famous people; also, Mary Stuart, for as long as she lived, was de facto Queen Elizabeth I’s heir presumtive and some of Elizabeth’s subjects would have liked to demonstrate their loyalty to the possible future Queen of England.

Nicholas Hilliard would have painted Mary from life and he and his workshop would then have produced other versions on commission. Mary herself would have ordered miniature portraits of her to distribute among adherents and friends.

One of Hilliard’s miniatures shows her wearing a necklace with the letter M, as well as a crucifix pendant on her breast, underlining her adherence to the Catholic faith. There is a full length version where she is wearing a similar crucifix and with a Latin inscription saying that it was done when she had been a prisoner for ten years (which would have been in 1578).

Mary Stuart in another version of the Hilliard portrait type, 1570s

Another very similar version has a big, square jewel of dark red colour instead of the crucifix pendant. All these portraits of c.1578 by the Hilliard workshop stand out by Mary wearing her ruff or collar open, instead of closed or tied up. I don’t remember to have seen this in any other Elizabethan portrait. It almost looks like Mary is wearing two different types of ruffs at the same time. 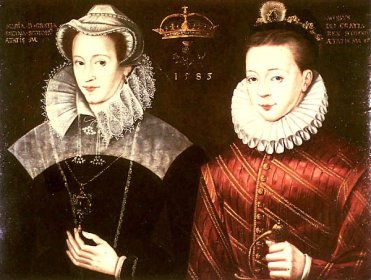 Mary Stuart with her son, King James VI of Scotland, 1583. This double portrait would have served propaganda purposes and was again inspired by the Hilliard 1578 portrait type.

The Hilliard version of the portrait (the one with the jewel) was also used for a double portrait of Mary and her son James, King of Scots, in 1583. (James had been crowned king as a baby in 1567 after Mary had been forced to abdicate.) This would have been made for propaganda purposes.

A copy of the effigy of Mary Queen of Scots, Westminster Abbey, in the National Museum of Scotland. Even in death, Mary is wearing an open ruff. Photo by Kim Traynor CC BY-SA 3.0

It is fascinating that Mary even in death was shown with an open ruff. Her effigy in Westminster Abbey shows us better than the paintings how a collar that was left open actually looked like. It is interesting to compare the effigy of Frances Grey, Duchess of Suffolk, also in Westminster Abbey, with Mary Stuart’s. Frances’ collar is closed in the middle.

Hi, I'm the author of "Amy Robsart: A Life and Its End" and "John Dudley: The Life of Lady Jane Grey's Father-in-Law". I blog at www.allthingsrobertdudley.wordpress.com
View all posts by Christine Hartweg →
This entry was posted in paintings and tagged costume, Frances Grey, jewels, Mary Queen of Scots, Nicholas Hilliard. Bookmark the permalink.